Lobbying as a Small Business Owner 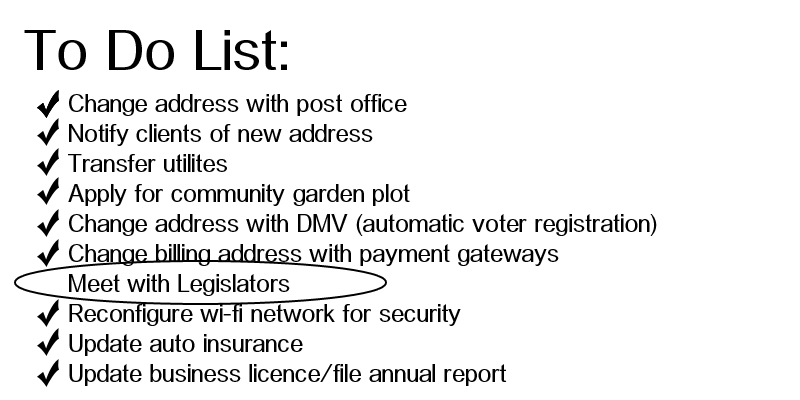 It was time to meet our legislators. We moved into a new neighborhood. The mail was forwarded, the utilities transferred, we settled into a community garden plot, now for the final step: get to know our representatives. Oregon wants its citizens voting and involved, created a unique law, mailing ballots to anyone with a drivers license. I love the vote by mail system. In Utah, I used to vote absentee to vote by mail.

Christy dutifully called the offices of our Senator Michael Dembrow and Representative Barbara Smith Warner. Scheduling a day both could see us merely an hour apart in Salem, Oregon. We promptly booked our Amtrak (bus?) tickets to visit one of only three art deco style state capital buildings and the fourth newest in the United States (thank you Wikipedia).

It isn’t just the architecture of the Salem capital that is new and novel. In early May 2015 Oregon passed a bill expanding gun sales background checks, one of the few states to enact gun control measures. Oregon has one of only six current female governors and the nation’s first and only lesbian Speaker of the House Tina Kotek, our former representative. I used to run into Tina at the grocery store regularly. Lobbying was much easier over produces and pet food at the check-out stand.


Our first meeting was with our Senator, Michael Dembrow. A kind eyed lefty sporting tweed and doing his best to reign in an office of four tenacious, very young staffers. He sits on several committees, primarily focused on natural resources and youth/early childhood issues. We found him standing in his office lobby, negotiating his schedule with a staffer. He is a man of deliberate mannerisms and measured response, candid and direct but gentle.

Usually the first question, politely posed by friends, staff and representatives alike is “Why are you here?” Do we represent some organization? Are we lobbying for a specific legislation or issue?

We sat down with representative Dembrow to explain. We are small business owners. Women in technology and a home based business. True small business. We are completely unrepresented. The Portland Business Alliance, functions as a Chamber of Commerce, representing more traditional business with traditional attitudes. The NFIB is also a poor choice for us for the same reason. The Main Street Alliance, of which we sit on the Executive Team, is concerned with issues of social justice, not business issues.

Next we met with Representative Barbara Smith Warner. Her staff and she are among the most delightful people at our state capital. That was easily the most useful and entertaining 30 minutes we spent in Salem. Representative Smith Warner will have my support walking neighborhoods, donations and votes for life. She connected us with valuable resources and followed up via email immediately.

We learned that the Oregon Secretary of State houses the Office of Small Business Assistance, a bridge for small business and regulatory entities and departments within the state. It is headed by Ruth Miles, a true small business advocate. Our Representative’s office connected us with Ruth. This proved a fruitful resource, providing us with invaluable information about resources and connections for small businesses, not to mention Ruth is a wicked smart and very fun individual.

Meeting my legislators reinforced that we live, work and build economic equity in a community in which we represent and are represented. We will be attending Senator Dembrow’s coffee hours. He invests time to meet face-to-face in our community. I look forward to seeing Representative Smith Warner around town. Perhaps I can once again lobby over pet food and produce.